Previous instances of “golden cross” and “death cross” events show that despite mixed behavior thereafter, the precedent for Bitcoin price volatility is clear.

Bitcoin (BTC) may not see a 170% increase after its fifth “golden cross” price event, historical data suggests as markets stay down 8%.

Analysis of price movements since 2009 shows Bitcoin has had a total of ten “golden cross” and “death cross” moments in its lifespan.

As Cointelegraph reported, hopes are currently high that the most recent golden cross will spark an identical reaction to the previous one — a 170% price surge in just two months.

Overall, however, two out of four golden crosses have resulted in gains, while the other two in fact saw price losses. Similarly, some death crosses were followed by price gains.

Bitcoin traders continue to dig for answers after BTC/USD abruptly dropped $1,000 in under an hour this week. The event came just days after the golden cross and represents Bitcoin’s fifth-largest drop ever.

“The only other time we’ve seen a greater dollar price drop is at the Dec. 2017 peak,” Yassine Elmandjra, an analyst at investment advisory firm ARK, noted on Thursday citing data from Coin Metrics. 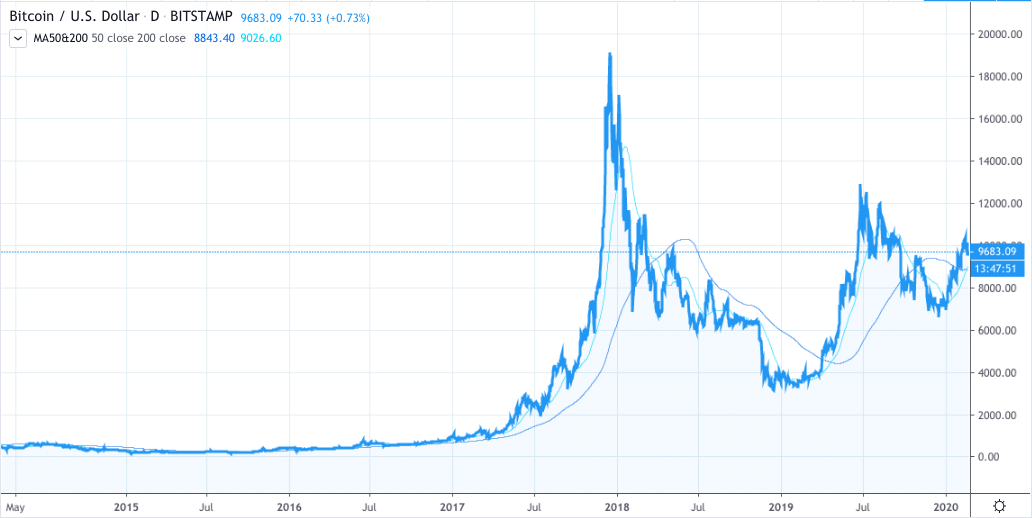 Nonetheless, some remain convinced that despite current reluctance to reclaim even $10,000, Bitcoin is still set to reap the benefits of the moving average behavior.

“Look what happened after the previous golden cross. First, it dumped around 10% and then it pumped 170% in 60 days,” one Twitter commentator noted, sharing a two-year chart of BTC/USD crosses, adding:

“If history repeats we will see the price of #bitcoin around 25K before April.”

$25,000 would represent a new all-time high for Bitcoin and is in line with predictions from figures such as Fundstrat’s Tom Lee for 2020.

The technical hypothesis, however, gives a much more conservative outlook for this year. According to the celebrated stock-to-flow model, between now and May’s block reward halving, Bitcoin should trade at an average of $8,600.